September 5, 2014 2:32 am / 6 Comments on A Biomimetic Study of Arctium minus (Burdock) Part II – Imaging Small (~mm) Hooks of Cellulose and Insect Chitin

As per the next entry, the first option, the head is sitting firmly upon the shoulders, the head arresting mechanism is interlocked.  This insect died naturally in a composed position.

Caught in flight as in death, the head of the dragonfly head sags away from its shoulders and the surface protruberances in the chitinous body parts that interface and interlock to hold the head in place (see figure that follows in the next entry).  This specimen was caught using a killing jar and some chloroform. The head sagged as the insect died in flight mode, not settling back into its attached position before falling into permanent sleep.

The True Story is that in order to catch two specimens of the same species, in the two separate positions, attached and detached, took me exactly three weeks and two specimens caught, within ten feet of each other, one caught alive and one found dead on a vine leaf.  No other  specimens were caught or collected and this is the only time I have ever come near catching one, nevermind two at the same time within three weeks of each other in my backgarden. 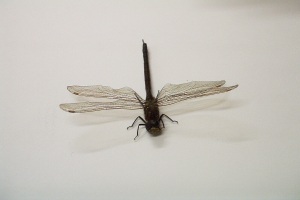 Must have been God’s hand.  Lawdy-lawdy!

Tiger’s Claw after Matteuk and Reuss.  The inner and outer profiles are logarythmic spirals as a result of uneven growth rates across the section of the toe where the root and growth area occurs.

September 3, 2014 1:48 am / 2 Comments on Burdock Attachment Mimic under Stress Analysis

Note the flattened flange is to mimic the single degree of freedom delivered by the Burdock’s own natural flattened bract structure that peels like an onion layer around the bulb shaped ovaries of the flower.

Of course once you have the morphology data what you do with this new “exact” morphology with its composite biomaterial composition of cellulose, at this size, you have something to test.

My pet theory was that one could develop a method for a single sample and then just repeat for many with exceptions or adjustments.

My other pet theory is there is always a “why” to design.  Why create yet Another plastic widget?  The truth is that they already exist, so you might as well do them yourself or someone else will.

And all you purist biologists/scientists had better remember a little phrase called Design for Manufacture. (DFM)  It’s a matter of Designing for Manufacture.  One needs to match up a manufacturing process with a product to keep costs down.  Not everyone can afford to layer manufacture and mass produce tiny pointed bent hooks.  Probably not anyone, yet.

A Useful diagram that did not come out in my papers which I have finally found in my back-up files.  It is basically showing the points in a dragonfly’s movements when the head is attached to and detached from its shoulder interlock.

Sorry about the quality.

You can see the scale bar here.